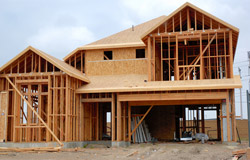 A persistent price gap between existing homes and newly built homes has given the former an advantage over the latter in recent months. But some economists say that gap will soon will start to narrow.

The latest Commerce Department data show new-home sales in July declined 2.4% from a month earlier, leaving the year-to-date total slightly less than the same period of 2013. Meanwhile, sales of existing homes rose by 2.4% in July from June for the measure’s fourth consecutive monthly gain.

Several economists and builders attribute the differing trajectories to the price gap between new and existing homes. While new homes almost always are more expensive, on average, than their older brethren, that gap widened since the recession.

Many factors caused the gap to widen. In the existing-home market, resales of foreclosed homes at distressed prices pulled down median prices. In the new-home market, the sidelining of many first-time buyers since the recession led builders to focus on building larger, more expensive homes to cater to the better-heeled, move-up buyers who still are buying.

The price gap has averaged 36.5% over the past two years as prices of both types of homes have steadily increased. Yet, with new-home prices higher to begin with, new construction lately has entered territory that many buyers can’t afford. Thus, economists speculate that would-be buyers of new homes are shifting to cheaper existing homes instead.

Now, a few economists and builders point to emerging factors that stand to cause new-home prices to increase at a slower rate than existing-home prices. First, the number of foreclosed homes in the resale market continues to shrink, which will help push the existing-home market’s median price upward.

Brad Hunter, chief economist at home-building research firm Metrostudy, part of Hanley Wood LLC, also foresees a shrinking gap. “I think the rate of increase of (prices for) new homes will slow dramatically compared to last year,” he said. “Then, at the same time, I think we’ll see faster increases on the existing-home side – maybe a percentage point or two of differential.”

The supply increase has already started. The supply of newly built homes available for sale increased to 205,000 in July, a four-year high. That’s up 44% from the market’s nadir in July 2012.

Builders are “comfortable that they will be able to sell those houses, so they’re adding inventory in anticipation of the demand being there,” said David Crowe, chief economist at the National Association of Home Builders.

Mr. Crowe said he isn’t concerned about oversupply, given that the current available inventory is well less than half of its highs during the boom of more than 500,000 homes.