Over the past few weeks, mortgage rates jumped at the higest levels in the past 30 years as a percentage increase. This jump was in  response to the Fed pulling back on the Qualitative Easing program as the economy improves.  This announcement resulted in a rise in the 10-year treasuries which mortgage rates follow.  After increasing from less than 4% to nearly 4.5%, rates have come down again and are hovering around 4.25%.  Because most industry experts believe rates will increase later in the year, many buyers are entering the marketplace in fear of rising rates and housing becoming less affordable. 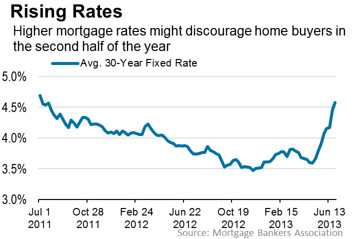 Today’s rates are still extremely low by historical standards, but these rates will not last forever especially as the American economy continues to improve since the Great Recession.  Home values in the Twin Cities Metro Area have increased significantly in June 2013, surpasing a $200,000 median income and about a 20% increase over last year’s pricing.   The Mullins Group expects pricing to continue to increase as inventory is down -20% and buyers are no longer on the fence.  If you are thinking about purchasing, we recommend taking advantage of today’s affordability before pricing and mortgage rates continue to increase.