Online Mortgage Rates; not always what they seem

When shopping for mortgage rates online, rates can vary significantly from lender-to-lender.  If  a rate seems “too good to be true”..it probably is!  Some lenders may advertise low rates; but when analyzing the terms many times they may include hidden fees or points buying down the rate.  The Mullins Group recommends engaging multiple mortgage broker who can provide information on the financing terms for the mortgage. Popular websites such as bankrate.com provide a good background, however your local lender will be able to provide the best details regarding financing.

The interest rates posted online by real-estate websites and mortgage lenders are often not the rates that home buyers get when they apply for a loan. 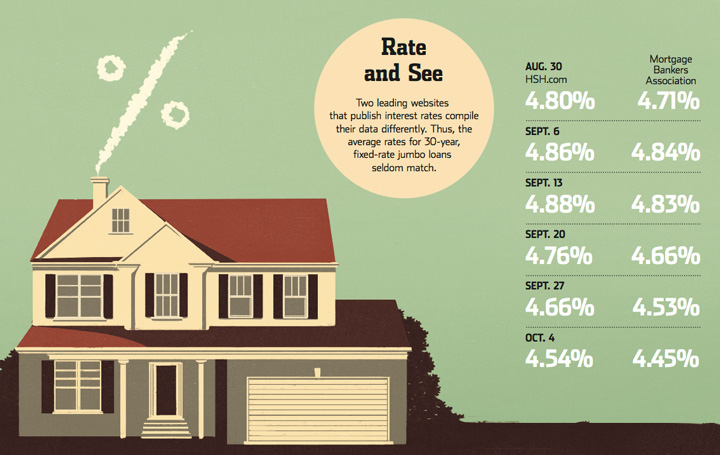 When shopping for a jumbo loan, what you see isn’t what you get.

But it isn’t a classic bait and switch. Lenders will argue that the way websites calculate average rates, the timing of the mortgage and a borrower’s unique credit profile all play into the interest rate a borrower ultimately receives.

“A [mortgage industry] website is a good place to get started, but it may not be the truest price when you’re done,” said Doug Lebda, CEO of LendingTree, an online mortgage marketplace.

The disparity is in how the averages are calculated, Keith Gumbinger, vice president of HSH.com, explained. That website asks lenders to provide the rate they would offer to a jumbo borrower who meets a specific set of parameters: credit score of 740 or higher, 20% down payment, fully documented income and/or assets, no discount points paid upfront and purchasing a single-family, single-occupancy residential home that is not a second home or vacation home. Qualifications standards are high to reflect the size of the loan, above the $417,000 usual limit (up to $625,500 in some high-price areas) allowed for government-backed conventional loans.

In contrast, MBA asks responding lenders for the average rate they offered on actual processed applications for jumbo mortgages, said Mike Fratantoni, MBA’s vice president of research. The mix of applicants in any given week can vary enough to create fluctuations, he added.

In both cases, actual borrowers may not get the average rate published because they have higher or lower credit scores, debt-to-income ratios, loan-to-value ratios or other differences, Mr. Gumbinger said.

Rates published on lenders’ and mortgage brokers’ websites can vary widely as well—and these percentages may change in real time. Something like a Fed announcement on bond-purchasing plans can cause rates to shift daily or even more often, said Julian Hebron, a vice president at San Francisco-based RPM Mortgage. “Weekly surveys are based on the previous week’s data, so even on the day those rates hit, they already have expired,” he said.

Lenders typically peg their jumbo rates to the performance of the secondary-mortgage market, in which loans have been bundled and sold as securities, Mr. Hebron said. That’s despite the fact that only 7% of the projected $220 billion in jumbo loans offered this year will be securitized, according to Inside Mortgage Finance.

That being said, lenders typically have more flexibility in pricing jumbos than they do with conventional loans. Here supply and demand comes into play, with some lenders willing to accept slightly lower margins to attract or retain their wealthiest customers, said Mr. Lebda. The company just launched a “mortgage negotiator” tool on its website where consumers can compare rates they have been offered to the broader marketplace, he added.

• Rate bands. Even if borrowers input personal data, some online mortgage calculators on lender websites don’t run full credit checks and base rates on bands of credit score or loan-to-value ratios, rather than precise data, Mr. Lebda said. “For example, if the band is 680 to 700, the price will assume that the person has a 700 credit score. But what if the score is 685?” he said.

• Points and fees. “The interest rate that you are presented with and ultimately get is also a result of the choices made by borrowers—whether you choose to pay a point, pay fees upfront or bury fees into the interest rate or loan amount,” Mr. Gumbinger said.

• Shop around. Because banks do have more flexibility with base rates with jumbo mortgages since they keep them on their books, borrowers could save money by consulting several lenders.

A version of this article appeared October 11, 2013, on page M4 in the U.S. edition of The Wall Street Journal, with the headline: In Rate Shopping, Surprises Await.