Good news for home sellers and existing home owners; the foreclosure crisis in the Twin Cities Metro Area continues to dwindle.   Foreclosures accounted for only 12% of the resales in June 2014; this compares to 26% of all transactions in 2013 that were distressed sales.  In fact, between 2009 and 2011 about one-half of all transactions in the Twin Cities area were considered distressed or lender-mediated sales.

Because of falling foreclosures, the overall median sales price continues to increase and was up to $192,000 and the end of 2013; an increase of +14% over 2012.   Although the downfall is considered good news for the overall economy and housing market, it does increase affordability for first time homebuyers as housing costs are escalating.  The Mullins Group expects lender-mediated transactions to continue to wane through 2013. 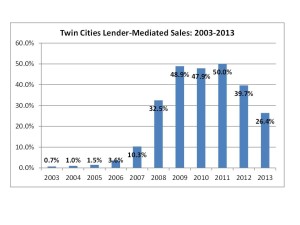 By almost every measure, the foreclosure crisis is fading — and fast.

Home prices are going up and repossessions are going down this summer, marking another pivotal shift for the housing market in the Twin Cities.

“Foreclosures no longer pose a major threat to the housing recovery in the Twin Cities,” said Daren Blomquist, vice president at RealtyTrac.

Foreclosures and short sales made up just 12 percent of all home sales in June, down from 60 percent three years ago. And less than 1 percent of housing units in Minnesota had entered the foreclosure process. That’s a 41 percent drop from last year and half the national average.

The comeback is riding the wave of the economic recovery. As more people return to work, fewer are at risk of losing their homes to foreclosure. Short sales also have declined dramatically, with home values rising to the point where many homeowners no longer owe more than their homes are worth.

The end of the foreclosure crisis brings new challenges for the market. The decline in distressed sales has meant fewer options for lower-income and first-time buyers.

“I’d heard that everyone is being foreclosed on and that there are short sales all over the place, but there wasn’t a whole lot for us,” said Maggie Lofboom, a first-time buyer who was shopping for a home priced under $100,000.

With the help of her parents, Lofboom started her hunt in February. She just wanted a cute little house with a garden in a decent neighborhood in Minneapolis. Finding it was no small feat. Lofboom sifted through hundreds of listings before stumbling on a 900-square-foot home in north Minneapolis that was listed for $100,000.

It was a short sale and dealing with the lender wasn’t easy, nor was it quick. She closed on the house in July and is thrilled. “It was overwhelming,” she said. “But I’m really excited.”

Chris Willette, a short-sale expert with Edina Realty, said short sales are tougher to do because many lenders are holding the line on price.

“There just aren’t a lot of good deals out there,” he said.

Willette said the combination of higher asking prices and the prospect of a long negotiating process on a short sale is intimidating for traditional buyers who might be dealing with a tight closing deadline.

In June, only 3 percent of all closings in the Twin Cities were short sales, or properties that sold with bank approval for less than their mortgage, according to the Minneapolis Area Association of Realtors.

The expiration of a federal tax exemption is another reason short sales are becoming less common. The exemption, which took effect at the height of the housing crisis in 2007 and expired at the end of last year, protected homeowners from being taxed on mortgage debt that was forgiven by the lender. The IRS will now treat the debt as taxable income, which could hurt homeowners already living on the financial edge.

Investors are also feeling the pinch of the decline in distressed sales. After driving the housing recovery by purchasing thousands of foreclosures, large institutional and individual investors are struggling with a lack of supply.

Jeremy Peterson, a sales agent for ReMax Results and a top foreclosure agent in the Twin Cities, said that within the past year Fannie Mae and Freddie Mac’s inventory had fallen nearly 40 percent, while HUD’s declined 30 percent.

At the same time, higher home prices have made foreclosures less appealing to investors.

“Because our market has rebounded in such a way, prices are too high for the average person looking for a rental investment,” he said. “In most cases, after the financial analysis, the numbers just don’t make sense.”

Eric Visker, a part-time real estate investor in Rosemount, bought two rental properties at the height of the housing crash, including a suburban bank-owned townhouse that he bought for just $35,000 in 2011. Now that it has appreciated, he’s ready to sell it — and reinvest the profit in another more expensive rental.

Trouble is, he said, rents haven’t risen at the same pace as home prices, so he’s having trouble finding one that will generate cash flow.

“It’s not as easy to get your hands on those low-dollar houses,” he said. “It’s slim pickings.”