Recently the US Census/Commerce Department published its annual Characteristics of New Housing report and to no surprise from real estate experts….today’s buyers desire larger homes.  The average size of a new home decreased during the Great Recession; however as the new construction has been rebounding over the past five+ years home sizes are growing again.  The median square feet of a new home if the US is now 2,453 square feet, up from 2,135 square feet in 2009 during the recession.  The incorporation of the 3rd-stall garage continues to increase a 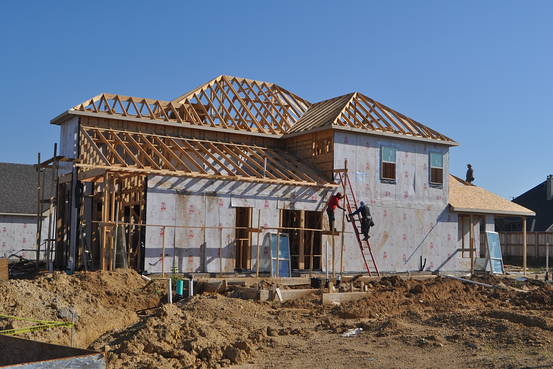 s 23% of all new homes today include a 3rd-stall garage.

The trend for larger homes has largely been driving by move-up and executive-level buyers; the target market for new construction today.  Because of increased labor, material, land, and infrastructure costs, builders have focused their attention to the move-up sector as entry-level homes have been economically difficult to construct.  However, there are numerous buyers on the side-line that would seek out lower-cost new construction if it was available.  The Mullins Group believes the first-time home buyer segment is deep and builders will once again start catering to this market segment.

Economists, builders and analysts expect smaller homes to make a comeback in coming years with the return of entry-level buyers.

Still, the shift toward larger new homes in recent years has been remarkable. Commerce Department data released this week show unprecedented demand in 2014 for homes with four or more bedrooms, three or more bathrooms and three-car garages.

The annual Characteristics of New Housing report found that 46% of single-family homes constructed last year had four or more bedrooms, up from 44% in 2013 and from 34% in 2009. Thirty-six percent of the homes built last year had three or more bathrooms, up from 33% in 2013. Meanwhile, two-car garages remain the norm, but they’re receding in popularity – to 62% of homes built last year from 64% in 2013 — while three-car garages increased to 23% from 21%.

The latest numbers are a reflection of a multiyear run-up in median new-home sizes, fueled by builders’ focus on better-heeled buyers with better credit while entry-level and first-time buyers largely remained sidelined in the recovery.

Lately, builders and other observers say they’re starting to see life in the entry-level market. Median new-home sizes had declined slightly for three consecutive quarters before taking an upward turn in this year’s first quarter.

“At this time next year, I would expect a lot of the variables that show size to be flat,” Mr. Dietz said. “As those first-time buyers come back, maybe [there will be] some reversal in the characteristics of completed homes.” 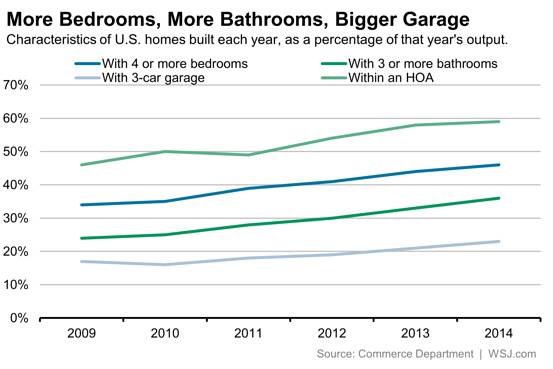 That isn’t to say McMansions will lose popularity. Rather, the overall mix of homes built will shift. “We haven’t seen a decline in the demand for larger homes,” said Dale Francescon, co-chief executive of Denver-based Century Communities, which operates in four states. “What we’ve really seen is an increased demand for smaller homes at a lower price point.”

Two other trends gained traction last year. Homes built with patios rather than porches or decks increased to 20% of new construction in 2014 from 17% in 2013. That reflects the broad preference among builders and buyers for patios that serve as outdoor kitchens, accessible through large sliding doors that often make the patio appear to be part of a home’s living space.

Buyers and builders also showed a growing affinity for homeowners associations. The Commerce data found that 59% of homes built last year were included in HOAs, up from 58% in 2013 and from a recent low of 46% in 2009 when Commerce started tracking the trend.

The HOA trend could be a sign of more U.S. home construction being handled by large, publicly traded builders, who tend to favor building in big subdivisions and master-planned developments, which often have HOAs. But it also could reflect buyers’ preferences.

“I think there’s been a flight to quality,” Century Communities’ Mr. Francescon said. “As we’ve continued to build out of the recession, people want a protection of their [property] values, and HOAs tend to do that.” 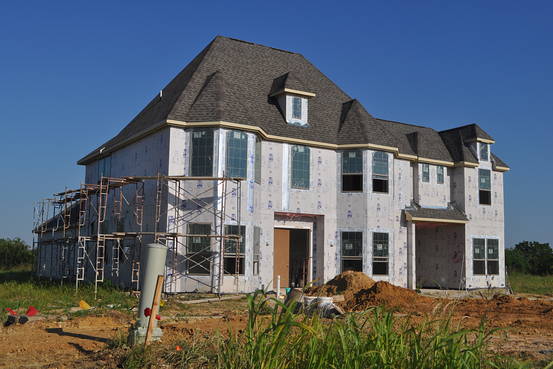